Rosalina is a princess from Super Mario Galaxy and debuts in Super Mario Galaxy, where she acts as a major non-player character who resides in the Comet Observatory, the game's hub world. She is also known as Princess Rosalina the adoptive mother of the Lumas, a fictional species in the game, and also watcher of the cosmos. In the game's storyline, the Comet Observatory gets attacked by Bowser, leaving her stranded in space without a source of power. In return for Mario's help in collecting Power Stars and repowering the Observatory, Rosalina agrees to help Mario rescue Princess Peach, whom Bowser had kidnapped. Rosalina has since appeared as a player character in subsequent Mario games, including the Mario Kart series since 2008's Mario Kart Wii, 2013's Super Mario 3D World and 2014's Super Smash Bros. for Nintendo 3DS and Wii U. The character has received generally positive reception, with praise being directed at her character development and in-game story, as well as her physical appearance. 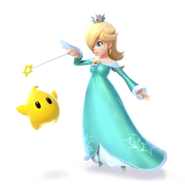 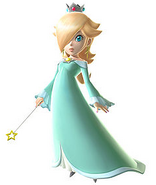 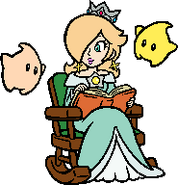 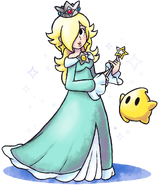 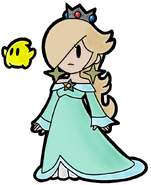 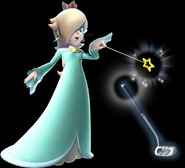 Retrieved from "https://scratchpad-iii.fandom.com/wiki/Rosalina?oldid=490429"
Community content is available under CC-BY-SA unless otherwise noted.