Rise of the Humans

Rise of the Humans is a 2012 American 3D computer-animated action fantasy film produced by DHX Media, Ragdoll Productions, BBC, Hit Entertainment, Thirteen WNET New York and distributed by PBS Kids. The film was directed by Caleb Jacobs (in his feature directorial debut) from a screenplay by Gavin Nyenhuis. It stars Billy Rosenberg, Brad Pitt, Alex Karzis, Leah Cudmore, Richard Binsley, and Richard Ian Cox. The film tells a story about humans - Will's protective father, the pink outfit girl, the yellow raccoon, and the frog, who enlist Fred to stop the evil Ledge from engulfing the world in darkness in a fight of dreams.

Fred and Axew awaken from a frozen pond with amnesia. Upon realizing no one can see or hear him, he disappears. Three hundred years later, Fred and Axew, as the young Spirit of Winter, enjoys delivering snow days to school kids, but resents that they do not believe in him. At the Caleb's House, Brandon warns Sinbad that Ledge is threatening the children of the world with his nightmares. He calls Wince, Dewitt, and Terri to arms. They are told that Fred has been chosen to be a new Guardian, and Wince brings him to Caleb’s House. Sinbad explains to Fred that every Guardian has a center, something they are the Guardian of, but a call for help from Terri's Cedarmont Kids, ZOOM and Pokémon characters ends the conversation.

Visiting Terri's world, which resembles a palace in India, Fred learns that each and every baby tooth contains childhood memories of the children who lost it, Fred's teeth included. However, Ledge raids Terri's home, kidnapping all of her subordinate Cedarmont Kids, ZOOM and Pokémon characters except Pachirisu and stealing all the teeth, thus preventing Terri from sharing Fred's memories and weakening children's belief in her. In order to thwart Ledge's plan, the group decides to collect children's teeth. During their journey, a quarrel between Sinbad and Wince awakens a boy, Anthony Mullins. Since he still believes, he can see everybody except for Fred. Ledge's nightmares then attack, provoking Dewitt as the Guardian of Dreams. Fred tries to intervene, but Ledge apparently kills Dewitt, who disappears.

As Easter approaches, the dejected Guardians gather in Wince's home. With the unexpected aid of Anthony's little sister, Keeley Alexander, they begin the process of painting eggs for Easter. After Fred takes Keeley home, he is lured to Ledge's lair by a voice. Ledge taunts him with his memories and fear of non-belief, distracting him long enough for Ledge to destroy the eggs, causing children to stop believing in Easter and Wince. With the Guardians' trust in him lost, a shamed Fred isolates himself in Antarctica, where Ledge tries to convince him to join his side. When Fred refuses, Ledge threatens to kill Pachirisu unless Fred gives him his staff, the source of his magic. He agrees, but Ledge breaks Fred's staff and throws him down a chasm. Unlocking his memories inside his tooth, he learns that he was a mortal teenager who fell to his death in the frozen pond while saving his younger sister. Inspired, Fred repairs his staff and returns to the lair to rescue the kidnapped baby Cedarmont Kids, ZOOM and Pokémon characters.

Due to Ledge, every child in the world except Anthony disbelieves, drastically weakening the Humans. Finding Anthony's belief wavering, Fred makes it snow in his room, renewing Anthony's belief and letting him become the first person to ever believe in and see Fred. They gather the boy's friends, whose renewed belief bolsters their fight against Ledge. He threatens them, but their dreams prove stronger than his nightmares, resulting in Dewitt's resurrection and the Humans reuniting. Defeated and no longer believed in, Ledge tries to retreat, but his nightmares, sensing his own fears, turn on him and drag him to the underworld. Afterward, Anthony Mullins and his friends bid goodbye to the Humans as Fred accepts his place as the Guardian of Fun. 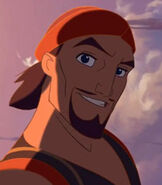 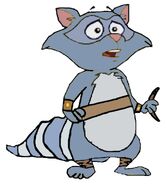 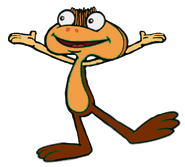 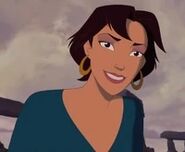 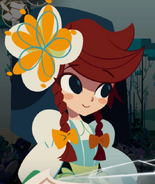 Brandon as the Man in the Moon

Will as Jack Frost (before he drowned) 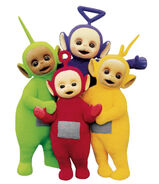 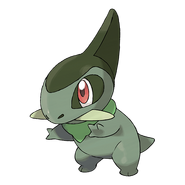 Axew as himself (a.k.a. Jack's friend)

Berry as himself (a.k.a. Jack's friend) 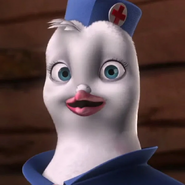 Victoria as himself (a.k.a. Jack's friend) 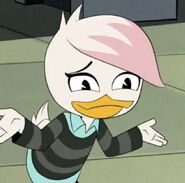 Lena Sabrewing as himself (a.k.a. Jack's friend)

Ball in Unrest at the Nursery (a.k.a. Axew's ball)
Community content is available under CC-BY-SA unless otherwise noted.
Advertisement