Pumbaa is a warthog who serves as Simba's best friends and childhood guardians. He's also the tetartagonist of Disney's 1994 animated feature film The Lion King, a supporting character in The Lion King II: Simba's Pride, and the deuteragonist of The Lion King 1 1/2. He's Timon's best friend and the adoptive uncle of Bunga.

He Played Miguel in The Road to El Dorado (CoolZDane Style)

He Played Hamm in The Cartoon Character Story series

He Played Lon in Duchhontas

He Played Speed in The Mouse Princess series 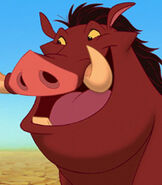 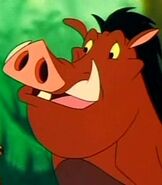 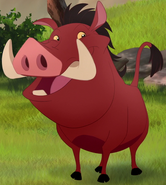 Add a photo to this gallery
Retrieved from "https://scratchpad-iii.fandom.com/wiki/Pumbaa?oldid=529165"
Community content is available under CC-BY-SA unless otherwise noted.