Start a Wiki
watch 14:21
The Loop (TV)
Do you like this video?
Paprika is Character from Blue's Clues, She is an Orange/Red Color, She has a Brother with Cinnamon, and Being with Mr. Salt and Mrs. Pepper

She played Uniqua in The Blue's Clues Characters (The Backyardigans)

She is a ladybug

She is a girl

She played Cleo in Kiyoshinocchio

She is a fish

She played Swan Odette in The Paprika Shaker Princess

She is a swan

She (Along with Cinnamon) played Chip in Beauty and the Squid

She is a teacup 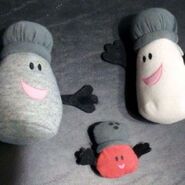 Retrieved from "https://scratchpad-iii.fandom.com/wiki/Paprika?oldid=569118"
Community content is available under CC-BY-SA unless otherwise noted.