Start a Wiki
watch 01:52
The Loop (TV)
Do you like this video?
Oliver & Company The Cat is the main protagonist of Disney's 1988 animated feature film Oliver & Company Cat He is Dodger's friend and later Jenny Foxworth's pet cats.

He played Tyrone in The Cats (The Backyardigans)

He is a moose

He is a joey

He is a boy

He Played Piglet in The Thomas O'Malley (Winnie the Pooh) series

He is a piglet

He Played Little Brother in Sci-Twilan (1998)

He is a dog

He Played Flounder in The Little Aztec Girl trilogy

He is a fish

He Played Dinah in Cecilia in Wonderland (1951)

He is a cat

He is a green eyed monster 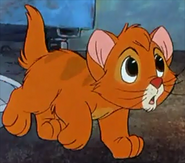 Add a photo to this gallery
Retrieved from "https://scratchpad-iii.fandom.com/wiki/Oliver?oldid=385235"
Community content is available under CC-BY-SA unless otherwise noted.