Hero Tunes: Back in Action

Tired of playing second banana to Dewitt, BJ demands his own cartoon from Hit Entertainment, but is promptly fired by the "Vice-President of Comedy", Maya Santos. Security guard and aspiring stuntman, Miguel Santos is asked to escort BJ off the studio lot, but the ensuing chase leads to the hero-mobile demolishing the studio water tower, causing Miguel to also get fired in the process. He returns home with BJ hitching a ride, where he receives a message from his father, action film star, Matt, who is actually a secret agent. Matt instructs his son to travel to Las Vegas, find his associate, Inez, and find a mystical diamond called the "girl with glasses" diamond, before he is shortly thereafter captured by the Acme Corporation, led by the childish Ledge. Miguel and BJ head for Vegas. Meanwhile, Dewitt’s routines fall apart without BJ, so Maya is forced to find and rehire BJ or face being terminated herself. Dewitt informs Maya of the situation, so they head to Miguel’s home where they find Matt’s spy car, and use it to pursue Miguel and BJ.

In Las Vegas, Miguel and BJ meet Inez in a casino owned by The Hacker, who happens to be an operative of the Acme Corporation. Inez gives them a strange playing card, which is a clue to finding the diamond. Hacker and his henchmen attempt to kill them and take the card, but they manage to elude him and flee in the spy car with Dewitt and Maya. The spy car, which can also fly, crashes in the Nevada desert. As they traverse the desert, Duck tries to stop them, but fails. The group eventually stumbles upon Area 52, run by a woman called 'mother', who informs them of the situation. She plays a video recording, which reveals that the Girl with Glasses has the power to devolve humans and evolve them back again. Acme intends on using the girl with glasses on all of mankind to manufacture their products, and then turn them back to purchase them. Randall Boggs, who was imprisoned in the facility, escapes and leads a group of fellow alien inmates to obtain the playing card, but the heroes escape. Seeing that the card has Wicked's face on it, the group conclude they must view the painting in the Louvre, located in Paris.

At the Louvre, they discover that the card contains a viewing window, and looking through it, the window reveals that the Mona Lisa has a map of Africa hidden beneath. Dewitt and BJ's co-star, Prince Charming, appears, revealing himself as an Acme operative, and chases Dewitt and BJ through the gallery for the card whilst Maya is kidnapped by Ledge's bodyguard, Devious Diesel, to obtain a photo of the African map with help of Digit. Miguel rescues Maya and Charming is disintegrated by Bugs after jumping out of a pointillism artwork. Dewitt and BJ reunite with Miguel and Maya, and they leave Paris.

Miguel, Maya, Dewitt, and BJ travel to Africa, meeting Baby Bop, Wince, and Pachirisu, who escort them to the ruins of a jungle temple where they find the blue monkey. However, Baby Bop and company reveal themselves to be Ledge, Diesel, and Mandrake in disguise. Ledge uses a disintegration gun to transport himself and the heroes to the Acme headquarters where he forces Miguel to give him the diamond, when Matt is revealed to be his prisoner, but goes back on his word to release him.

Randall Boggs is sent to place the blue monkey on an Acme satellite which will emit an energy beam around the world to turn everyone, except Ledge, into human with glasses. Miguel and Maya rescue Matt from a death trap, whilst Dewitt and BJ pursue Randall Boggs into space. Dewitt is incapacitated, prompting BJ to become Dino Dodgers, in order to destroy the blue monkey. The transforming energy beam only strikes Ledge, turning him into Jellybean Joe. Dewitt and BJ return to Earth, where BJ discovers the whole adventure was staged to make a film. However, Dewitt promises BJ they will be equal partners, but just as BJ's luck seems to be improving, he is flattened by the Hero Tunes iris, where Pig attempts to close the film with "That's all folks!" only for the studio to shut down before he can finish, and he tells the audience to go home.

Quacker the Duck as Road Runner 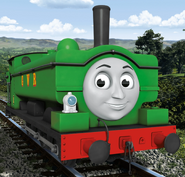 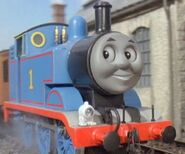 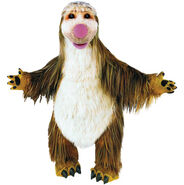 Ledge as Mr. Chairman
Community content is available under CC-BY-SA unless otherwise noted.