Chi's Mother is Chi's real mother. In the first book, she is walking with Chi and her brothers and sisters, but Chi get lost. Sometimes she can be seen in the background, her mom is gray with black stripes. Her name Mary and She has 3 kittens including Chi.

A female named Anne and a male named Terry and Chi

Chi's mother is shown walking ahead of her three children, when Chi gets distracted. Chi's Mother doesn't seem to notice as Chi gets left behind. She is later shown briefly in flashback feeding Chi and her siblings, as Chi whines about being hungry.

She is shown in another flashback in Chapter 2, as Chi remembers how she used to lay next to her. Chi, after drinking up her milk, lays down full and satisfied, until she remembers her mother licking her clean. Chi then gets up and is about to head back home, until she gets lost in Mr. & Mrs. Yamada's home.

Chi is shown to be laying in her make-shift bed as she recalls her mother. Chi then decides that it is time to leave the Yamada's home and search for her mother. However, after her near-death experience, Chi sadly lays still.

Chi is, once again, trying to escape as she recalls her mother and siblings. Chi however gets distracted by some milk, which in turn has Chi laying down. Chi's mother appears again in her mind as she continues to escape. Chi later dreams of her family as she lay asleep in Yohei's shoe.

Chi's mother is mentioned in Chapter 8, as Chi lies down in the sunlight and recalls her mother. She continues remembering and Chi appears to be getting these memories from watching Yohei and his mother.

Chi later sees her mother in a dream as she recalls all the events she and her mother had used to do in the past. Chi then wakes up in the same situation as the first chapter, and Chi quickly starts calling for her mother. Mr. Yamda then pets Chi, calming her from her nightmare as Chi thinks of her mother. 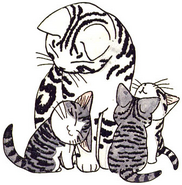 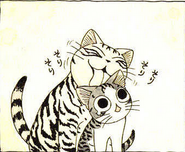 Retrieved from "https://scratchpad-iii.fandom.com/wiki/Chi%27s_Mother?oldid=496618"
Community content is available under CC-BY-SA unless otherwise noted.