Blu is the main protagonist in Blue Sky Studio's 6th animated feature film Rio. He was the last of his kind, the Spinx's Macaw. He is shy and socially awkward and the opposite of his mate, Jewel.

He Played Mr. Potato Head in Animated Comedy Story 1, 2, and 3

He Played Iago in The Jim Hawkins (Aladdin) trilogy

He is a Bird

He Played RJ in Over The Toon Hedge (Pachirapong Chaiyadech Style)

He Played Jet the Hawk in Dumbonic the Elephant game series

He is a green hawk 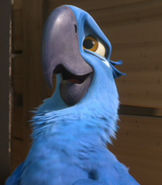 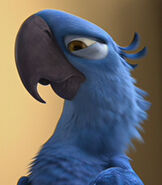 Add a photo to this gallery
Retrieved from "https://scratchpad-iii.fandom.com/wiki/Blu?oldid=471831"
Community content is available under CC-BY-SA unless otherwise noted.