Scratchpad III Wiki
Register
Don't have an account?
Sign In
in: Characters, Spyro the Dragon Characters, Female Characters,
and 7 more

Bianca (ビアンカ Bianka in Japanese) is a character that first appeared in Spyro: Year of the Dragon, starting off as a minor antagonist, but becoming an ally after learning about what the Sorceress's true intentions were involving the newborn dragons. She is a female rabbit who used to serve the Sorceress.

Though only a student in sorcery, Bianca is shown to possess some magical abilities, mostly in the form of transformation. Her powers are shown when she transforms a lowly Rhynoc into Buzz, and her creation of a large creature based on a rabbit in Midday Gardens. However, her ineptitude is also displayed when she attempts to attack Spyro, but can only create a butterfly. She requires the magic of 100 Dragon Eggs to open the door that leads to the Sorceress's lair, implying that dragons affect her ability to use magic as well. Bianca also has the ability to teleport via a magical prismatic streak, and enabled Spyro to breathe more than one element, although the spell "doesn't exactly work right."

In Spyro: Season of Ice and Spyro 2: Season of Flame, she is able to open the portals after Spyro collects certain amount of fairies/fireflies.

In Shadow Legacy, she mentions that she can sense whether or not people are telling the truth.

For years, Bianca served under the Sorceress as her apprentice, wanting to become a sorceress herself. As the years had gone by, the young sorceress in training noticed that the magic in her home, the Forgotten Realms, was drying up.

Bianca, along with a group of Rhynocs, were ordered by the Sorceress to steal the Dragon Eggs from the Dragon Realms in an attempt to get more magic into their worlds. As soon as Bianca grabbed the last dragon egg, she accidentally woke up Hunter, whose yowl of pain alerted the other Dragons. They tried to stop the rabbit girl, but she managed to escape with the egg in tow. When Spyro came to the Forgotten Realms to retrieve the Dragon Eggs, Bianca appeared and threatened the purple dragon in an attempt to scare him back to the Dragon Realms. When that didn't work, she confronted the fearless Spyro and his companion Hunter, and fired a spell at them, which successfully hit Hunter. An enraged Spyro then chased Bianca off with a blast of fire. When Spyro was making his way to Midday Gardens, Bianca was scolded by the Sorceress after failing to stop Spyro. She was then given a spell book, and used some magic to transform a Rhynoc into Buzz to defeat Spyro.

While she was practicing magic in Midday Gardens, Bianca was saved by Hunter from a giant rabbit monster she created. Later, in Evening Lake, the Sorceress captured Hunter and kept him as a prisoner until Bianca found out what the Sorceress would do with the Dragon Eggs to get power by using the newly hatched dragons' wings to concoct a spell that will allow her to live forever. Upon hearing the Sorceress' plan, which included killing the baby dragons, Bianca was horrified and later helped Hunter escape before teaming with Spyro to defeat the Sorceress. Afterwards, Hunter and Bianca had fallen in love, kissing each other under a full moon at the Fireworks Factory (much to the distaste of Spyro and Sparx).

When Ripto stole all the Dragonflies from the Dragon Realms in Spyro: Enter the Dragonfly, Bianca used her magic to allow Spyro to temporarily breathe more than one element, which was a helping factor in his second battle against Ripto.

At the end of the summer, Bianca sailed back to the Forgotten Realms to visit her cousins in Lost Fleet. Afterwards, she was trapped and imprisoned in the Shadow Realm until she was freed by Spyro. Bianca then went off on her own to confront the Sorcerer, but was later captured and held hostage by Red. Spyro defeated Red, and Bianca told him how to get to the Sorcerer's domain. After the Sorcerer's defeat, Bianca and the others prepared themselves for the Sorceror's next move.

Bianca as seen in Spyro: Enter the Dragonfly

Bianca as seen in Season of Flame.

Bianca's dialog image as seen in Season of Flame.

Bianca in her purple robe 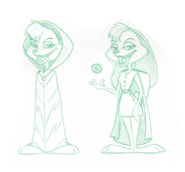 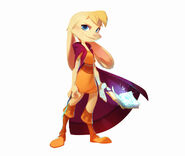