Agent 9 (エージェント９ Ējento9 in Japanese) is a space monkey native to Agent 9's Lab. He started out life as a lab monkey for the Professor, but then was given a laser blaster and taught how to fight. He first appeared in Spyro: Year of the Dragon, and was playable in two subsequent games.

Agent 9 is incredibly trigger happy, and even gave his laser blaster a name ("Mr. Laser Blaster"). He speaks in the third person point-of-view, most likely because he either wants to be modest about his achievements, or to act as someone who sees him as a hero or idol. Along with being completely psychotic, he has an incredible disdain for Rhynocs, leading to his intense liking for killing them. Agent 9 always carries his laser blaster. He also loves to make his enemies dance by force using his blasters, as shown when he tried to show Spyro a "dancing bear"! The Year of the Dragon manual gave this as Agent 9's introduction:

"Don't monkey around with Agent 9 because he is one! Agent 9 is one of the Professor's lab monkeys. But after special treatment and training he is no ordinary chimp. Agent 9 is a highly intelligent special operative whose specialties are laser blasters and precision delivery of explosives."

Agent 9, when he first appeared, was decked out in red and green armor with a yellow helmet (similar to Marvin the Martian) with a laser blaster. In his next appearance, he changes his wardrobe and wears a futuristic chrome outfit and matching helmet with his trademark laser blaster. Images from the Year of the Dragon website reveal that Agent 9 originally been decked out in yellow and had beady black eyes, as opposed to his current eyes.

Agent 9 is incredibly smart and has incredible marksmanship. He is also able to fend off many Rhynocs without being overwhelmed. He also single handedly cleared out a Rhynoc infested area of the Fireworks Factory, defended his homeworld from attack, and survived the five trials of the Haunted Tomb.

Agent 9 is also able to throw bombs from a bomb dispensing machine. In the Fireworks Factory, Agent 9's laser blaster is upgradeable to a machine gun with 500 rounds.

Agent 9 was a lab monkey among eight others of the Professor. From the Year of the Dragon introduction that was given, we can infer that the Professor liked Agent 9 the best, and gave him special training as well as a high powered laser blaster. This may very well be the reason that Agent 9 is psychotic and obsessed with killing Rhynocs.

Agent 9 was apprehended by the Sorceress as her Rhynoc army took over his world. He was entrusted to Moneybags, who sold his freedom to Spyro for 1,300 gems. After Agent 9 was freed, he showed Spyro 'how to make a bear dance', and blasted the feet of Moneybags, sending him running for his life.

After being freed, Agent 9 returned to his homeworld and rid his lab of Rhynocs. This process was arduous, as the Rhynocs had taken control of almost everything, and clogged the Professor's machines with birds. Agent 9 was able to destroy the control panels leading to the Rhynoc hideouts inside the lab, presumably killing the remaining Rhynocs inside of dehydration and starvation.

After freeing the lab, Agent 9 responded to Handel's distress call from the Fireworks Factory. Greta had stolen the Sorceress' plans to her rocket so that the Professor could build one for Spyro to travel to Midnight Mountain. However, Handel had found a Dragon Egg deep underground in the Fireworks Factory, and sent Agent 9 on a Doom-esque mission to save it. Unfortunately, when Agent 9 saved the egg, Handel was captured and tied to a bomb by a Rhynoc. Agent 9 fought his way back through the underground labyrinth through hordes of Ninja Rhynocs to save Handel from certain death. Despite the fact that the bomb blew up just as Agent 9 returned to the scene, Handel somehow survived the blast. Agent 9 was rewarded with another Dragon Egg the Rhynoc had left behind.

Afterwards, Agent 9 went to the Haunted Tomb, where he was cursed by the native Egyptian Dogs to have his tail turn into a snake. He was able to brave the five trials of King Rover in an attempt to redeem himself. After besting the five trials, Agent 9 went to the Dino Mines, where he was promised deputyship if he could eliminate the Bailey Gang. Agent 9 was successful, and became a deputy of the Dino Mines Sheriffs.

After the Sorceress's defeat, Spyro visited the Professor and Elora at Agent 9's Lab. Spyro inquired to know where Hunter was, but the Professor would not tell Spyro. Agent 9, however, almost told Spyro that Hunter was with Bianca, but the Professor was able to distract Agent 9 by claiming there was a Rhynoc in the bushes. In the epilogue, it was revealed that the curse Agent 9 received in Haunted Tomb came true, as his tail was turned into a snake.

Although Agent 9 doesn't appear on Spyro: Enter the Dragonfly, a giant balloon shaped like him can be seen just before Ripto and his monsters meddled into a party in the first cutscene. 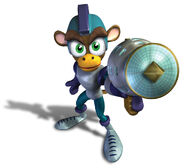 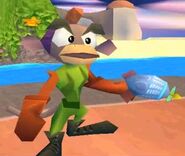 Agent 9 flying under the two moons in Season of Flame. 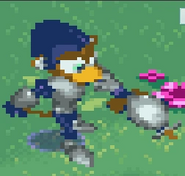 Agent 9 as seen in Season of Flame 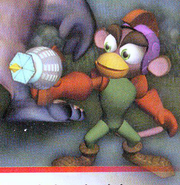 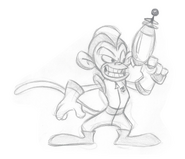 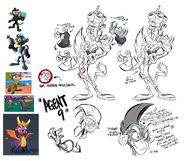 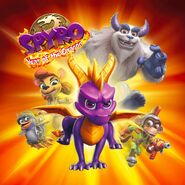 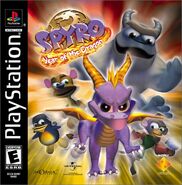 Overworld sprite in Spyro: Attack of the Rhynocs

Dialog sprite in Spyro: Attack of the Rhynocs

Dialog sprite in Spyro 2: Season of Flame
Add a photo to this gallery


Cite error: <ref> tags exist, but no <references/> tag was found
Retrieved from "https://scratchpad-iii.fandom.com/wiki/Agent_9?oldid=560605"
Community content is available under CC-BY-SA unless otherwise noted.